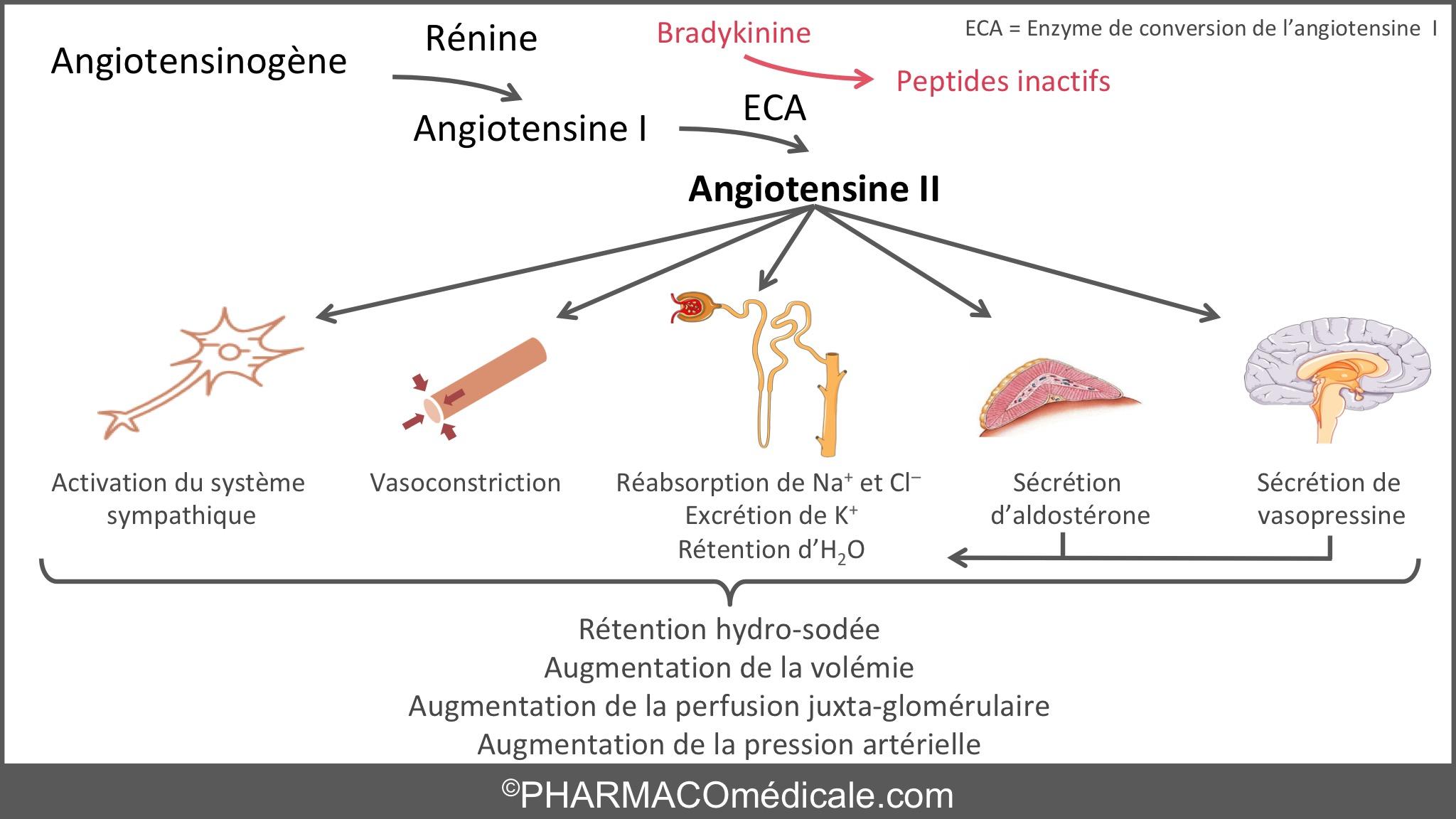 2- Angiotensin converting enzyme (ECA) is a glycoprotein comprising two homologous domains each with a catalytic site. ACE is mainly present on the membrane surface of endothelial cells, especially the pulmonary vascular bed, but can be found in plasma. It is a non-specific enzyme, the main substrates of which are angiotensin I and bradykinin. It is in this respect amusing to note that the discovery in the 1960s of ACE inhibitors from the venom of certain vipers was linked to their property of intensifying the response to bradykinin. The conversion of angiotensin I to angiotensin II is so rapid that the pharmacodynamic response of these two peptides is not distinguishable. However, the inherent potency of angiotensin I is less than 1% of that of angiotensin II.

Most of the physiological effects of angiotensin II (see below) are mediated by stimulation of AT1 receptors.
The functional role of AT2 receptors, sometimes considered as cardioprotective receptors, is less, consisting of an antiproliferative, proapoptotic, vasodilator and antihypertensive effect.
4- Physiological effects
The main effect of the renin-angiotensin system is to ensure the short and long term regulation of arterial pressure. Angiotensin II has a very potent vasoconstrictor effect (EC50 0.3 nM). In addition, it is responsible for vascular and cardiac hypertrophy, and an increase in the synthesis and deposition of collagen.
4-1 The mechanisms responsible for the increase in peripheral arterial resistance induced by angiotensin II (Figure 1) are:
a. A direct vasoconstriction, general, but more powerful at the renal level
b. An increase in adrenergic neurotransmission. This phenomenon is linked to:
a. increased release of norepinephrine from sympathetic nerve endings
b. inhibition of norepinephrine reuptake in sympathetic nerve endings
c. to an increase in the vascular effect of norepinephrine.
vs. An increase in sympathetic discharges linked to a direct effect on the central nervous system
d. A release of adrenaline from the adrenal medulla.
4-2 Angiotensin II has the renal effect of decreasing urinary excretion of Na + and increasing urinary excretion of K +. The mechanisms responsible for the modification of renal function by angiotensin II are:
a. A direct effect of increasing the reabsorption of Na + by stimulation of the Na + / K + exchangers of the proximal tubule and of the Na + / K + / 2Cl- symporter of the ascending branch of Henlé. This effect makes it possible in healthy subjects to maintain a stable blood pressure despite very large variations in sodium intake. For example, in low sodium intake, renin is released and angiotensin II acts on the kidney to reabsorb Na +.
b. A release of aldosterone from the adrenal cortex, for angiotensin II concentrations having no vasoconstrictor effect.
vs. A decrease in renal blood flow by direct vasoconstrictor effect on the renal vascular system and indirect by increasing systemic sympathetic tone (linked to stimulation of the central nervous system) and intrarenal.
d. A variable effect on the glomerular filtration rate: in fact, vasoconstrictor effects on the afferent and efferent arterioles of the glomerulus are opposed. In healthy subjects, the resulting effect is relatively neutral on glomerular filtration rate. In renovascular hypertension, the effect on the efferent arteriole predominates so that angiotensin II increases the glomerular filtration rate. This explains why a sudden blockage of the renin angiotensin system leads to acute renal failure in bilateral renal artery stenosis. In general, when the renal perfusion pressure is low, angiotensin II, by contracting the efferent arteriole of the glomerulus, makes it possible to maintain a sufficient glomerular filtration rate.