All cells in the body have the ability to release extracellular vesicles, which act as messengers in the body. Roughly speaking, there are three subgroups of vesicles - exosomes, microvesicles and apoptotic bodies - which vary in size between about 30 nm and> 1,000 nm. The smallest of these vesicles, the exosomes, which can be produced by virtually any cell in the body and found in all body fluids, have received much attention in recent years. This is because they can transmit a variety of biological signals and act as messengers between different cells.

Exosomal signaling occurs in two ways: either by a load of functional proteins and / or the transfer of functional RNA molecules from one cell to another directly to the target cell's cytoplasm or by ligand-receptor interactions between molecules on the exosome membrane and on the cell membrane of the target cell. Thus, the exosomes mediate a complex intercellular communication, which is fundamentally different from the traditionally known modes of communication in the body.

The importance of exosomes in both health and disease is now gradually being clarified, and clinical applications in diagnostics and therapy are in the development phase. Experiments in which cancer-specific peptides have been loaded on the body's own exosomes for cancer therapy in humans are ongoing [1]. The protein and RNA content of exosomes will also soon be able to be used as biomarkers in several diseases, such as various forms of cancer. Because exosomes are natural vectors for transferring RNA from one cell to another, they can be used as carriers of new RNA-based drugs or as vesicles into which gene therapy vectors can be introduced.

The exosomes are formed in the endosomal machinery of the cell

Endocytosis is the mechanism by which cell membrane molecules such as lipids and proteins as well as materials from the extracellular space are internalized and redirected to different subcellular destinations. Exosombiogenesis is presented schematically in Figure 1. Proteins that are processed and secreted via exosomes can be sent to the cell's endosomal organelles in two ways: either from the cell membrane by internalization / recycling of membrane-bound proteins via specialized lipid-rich areas in the cell membrane (lipid rafts) new production in the Golgi apparatus. The cell membrane consists of a double layer of phospholipid molecules, which forms a continuum where different membrane proteins are bound.

There is a functional heterogeneity in the cell membrane which consists of the lipid rafts, which are specifically enriched with sphingomyelin and cholesterol and thus give them their distinctiveness. These membranous loci selectively attract various proteins involved in intercellular communication and signal transduction [2].

Initially, a lipid float is invaginated in the cell membrane into an intracellular bladder called the "early endosome". Intraluminal vesicles are formed intracellularly in "late endosomes" by invaginating the membrane of the endosome in several places and forming a so-called multivesicular body (MVB). At the first invagination, the outside of the cell membrane will turn inward into the endosome. The following invaginations that lead to the formation of multivescular bodies, however, mean that the smaller intraluminal vesicles (ie not yet released exosomes) in the MVB have a normal membrane topology, where the double invaginations make the membrane get the original side out.

This specific way of generating microvesicles is characteristic of exosomes and means that proteins that are processed and secreted via exosomes retain their orientation and three-dimensional structure and thus their biological properties and functions.

Subsequently, the MVB membrane fuses with the cell membrane and releases the intraluminal vesicles into the extracellular space, after which they are called exosomes. Exosomes have a spherical shape with a characteristic appearance (Figure 2), they contain a membrane enriched with sphingomyelin, cholesterol and tetraspanins and are 30–100 nm in size [3].

The selected proteins present in the original float portion of the cell membrane will also be present in the membrane of the exosome. Some of these proteins are ligands, and these have affinity for other receptors on other cells. This may thus explain why many exosomes are targeting, i.e. that they attach to cells with appropriate surface receptors, just as white blood cells can attach to a particular receptor on the endothelium. It has been found that exosomes have a specific content of proteins as well as of RNA of different varieties. It has recently been shown that they may also contain DNA fragments. The exosomes reflect the mother cell that produced them, and their contents change depending on the current state of the mother cell, such as the degree of activation or level of cellular stress.

Exosomes' ability to interact with other cells

Exosomes have extremely varied biological functions in different cell systems. So far, everything from immunostimulatory and immunosuppressive processes to regulation of the coagulation cascade, metastatic regulation and cardiac functions have been demonstrated.

The term exosomes was coined in 1987 [4]. However, 10 years earlier, newly discovered vesicles were described in prostate secretions (prostasomes) [5], which can bind to sperm, probably via specific adhesion molecules [6]. These vesicles belong to the exosome family. The sperm as a foreign cell is given protection in the woman's genital tract via a prostasomal surface protein (CD59, which disarms the complement system). However, malignant cells thus receive undeserved protection, as CD59 can also be transferred to cancer cells.

The intestinal epithelium can release exosomes that increase immunological tolerance and prevent allergic sensitization to foods. This form of exosome is called a tolerosome [7]. This system probably contributes to the phenomenon of «oral tolerance«, ie that we do not usually become allergic to what we get in us via the gastrointestinal tract.

The placenta has abundant exosome production in the syncytium trophoblast layer during normal pregnancy [8]. The placental exosomes are immunosuppressive and carry several important proteins that specifically down-regulate cytotoxic functions in the mother's immune system. The continuous exosome secretion during pregnancy forms a fetal exosome gradient in the mother's blood, which forms a shield around the fetus and placenta and helps to protect against attacks from the mother's immune escape mechanism ("immune escape mechanism") - and which is important for pregnancy completion [9 ].

It has recently been reported that exosomes contain functional mRNA and micro-RNA, which can be passed from one cell to another. In addition, the RNA content of the exosomes is clearly different from the cell's own RNA, which suggests specific loading of RNA in exosomes [10]. The same group was also able to show that the RNA content of exosomes changes in connection with cellular stress, which also changes the biological function of the exosomes.

Approximately at the same time, it was described that exosomes from human breast milk have the ability to induce so-called T-regulatory cells (expressing the transcription factor Foxp3) [11], which may be important for the induction of tolerance in breast-feeding infants. The group also showed that breast milk exosomes contain RNA, which may at least partially explain the function of breast milk exosomes [12]. Bronchoalveolar lavage contains exosomes that are proinflammatory in patients with sarcoidosis and asthma.

Recently, it has been shown that cardiomyocytes can release exosomes / microvesicles containing DNA capable of transferring functional DNA to recipient cells (Figure 3), which in these experiments were fibroblasts [13]. In addition, the environment of the parent cell affects the quality of the released exosomes and the way in which they affect transfected recipient cells [14]. 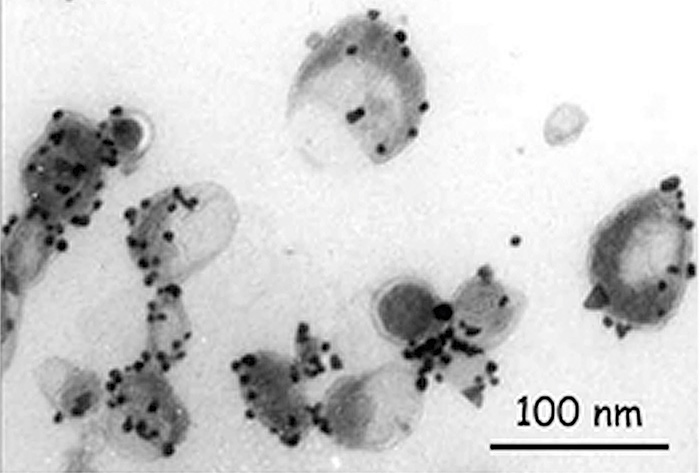 The future of exosome research is bright and exciting

Cell biology and immunology. Because exosomes and other extracellular vesicles have extensive biological functions, it is important that they continue to be studied from a basic research perspective. For example, we do not know exactly how exosomes are packed with their biological contents, how they are released, how they reach the target cell or how they deliver their contents, such as RNA. In addition, different extracellular vesicles have different contents, which further increases the complexity of how cells communicate.

Biomarkers in disease. Some exosomes express different specific surface markers, which can often be related to the exosome-producing cell. It has been shown that exosomes from eg prostate, melanocytes, cardiomyocytes and syncytiotrophoblasts all express cell-specific surface markers. Malignant cells appear to release greater amounts of exosomes than healthy cells, increasing the concentration of tumor-related exosomes in blood and other body fluids. Exosomes can participate in disease processes, and it has been shown that exosomes from malignant melanoma can prepare lymph nodes for metastasis [15]. The RNA content of exosomes is also clearly affected in tumor disease, which increases the possibility of using these as biomarkers.

In the long term, exosomes can be used as specific and sensitive markers, eg instead of PSA for prostate cancer [16]. Extensive research is currently being conducted to utilize exosomes in the circulation as biomarkers for prostate cancer, ovarian cancer, malignant melanoma and brain tumors. These are likely to be followed soon by other tumor forms. In addition, it is conceivable to use exosomes as biomarkers for autoimmune or other inflammatory diseases and certain heart diseases. Hopefully, exosomes could be used both for more targeted diagnostics (eg to identify specific oncogenic mutations in tumor disease) and to monitor the clinical effect of treatment.

Therapy. In the future, it can be predicted that the exosome will not only have diagnostic significance but also become a tool in therapy. There are already techniques for filling liposomes with a content of a molecular biological nature, and clinical therapy trials are underway for, for example, familial amyloidosis. Another clinical example of therapy is the treatment of paroxysmal nocturnal hemoglobinuria (PNH).

It can be assumed that exosomes will also be able to be filled with desired signal substances, DNA sequences, inhibitory / "silencing" RNA, etc. for gene modulation of hereditary diseases or tumor diseases [17, 18]. With the right surface molecules, they become the target of the diseased organ, where their contents are released. It is already known that exosomes can transfect other cells and that their contents are transferred to the target cell and that its contents of RNA and DNA are transported to the target cell with altered cell function as a result. Recently, a group at Harvard Medical School and Umeå University showed that the introduction of gene therapy vectors with adenovirus in exosomes is a promising way to both target in a more precise way and streamline intracellular vector delivery and get rid of unwanted side effects in gene therapy [19].

Another alternative for therapy is to remove or counteract the production of cancer cell exosomes, which thus shuts off the body's own cancer defenses.

A search on PubMed with the search terms "exosomes" and "function" today reveals over 1,200 publications. In 2011 the number of publications was 202, in 2006 65 and in 2001 the number was 12. The field is thus currently growing explosively. Despite this, the ignorance is still great, but researchers in the field are convinced of the cell biological and clinical relevance of this signaling system. A review article on exosomers' biogenesis and mechanisms of action in the cardiovascular field will be published in early 2014 [20]. An international association for the study of extracellular vesicles has been formed (International Society for Extracellular Vesicles [ISEV]), and the association publishes a special journal called the Journal of Extracellular Vesicles.