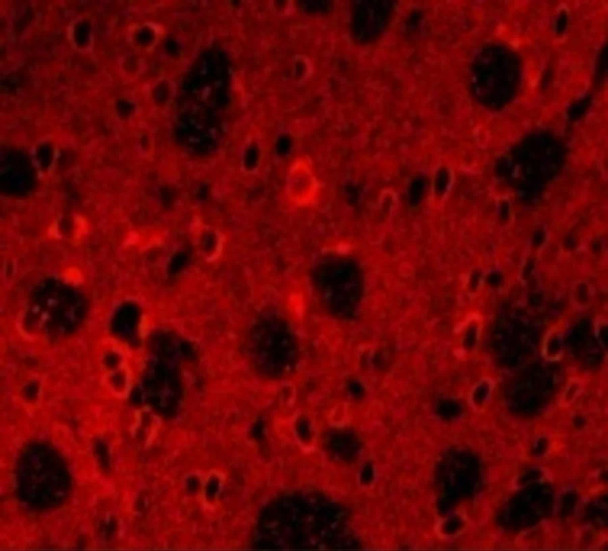 Immunogen: Rabbit polyclonal antibodies were raised against peptides corresponding to amino acid sequences from each of the corresponding proteins.

Application: These polyclonal antibodies can be used for detection of APP, BACE and BACE2 by immunoblot at 1 - 5 μgg/mL. APP and BACE antibodies can detect their respective proteins via immunohistochemistry at 2 - 10 μg/mL.

Specificity: Both APP antibodies will react with the C99 fragment of APP.

Storage Condition: Stable at 4˚C for three months, store at -20˚C for up to one year.

Background: Accumulation of the amyloid-β peptide (Aβ) in the cerebral cortex is a critical event in the pathogenesis of Alzheimer’s disease. The βamyloid protein precursor (APP) is cleaved by one of two βsecretases (BACE and BACE2), producing a soluble derivative of the protein and a membrane anchored 99-amino acid carboxy-terminal fragment (C99). The C99 fragment serves as substrate for βsecretase to generate the 4 kDa amyloid-β peptide (Aβ), which is deposited in the Alzheimer’s disease patients’ brains. BACE was identified by several groups independently and designated β-site APP cleaving enzyme (BACE) . BACE is a transmembrane aspartic protease and co-localizes with APP. BACE2 also cleaves APP at β-site and at a different site within Aβ. BACE2 locates on chromosome 21q22.3, the so-called ‘Down critical region’, suggesting that BACE2 and Aβ may also contribute to the pathogenesis of Down syndrome.