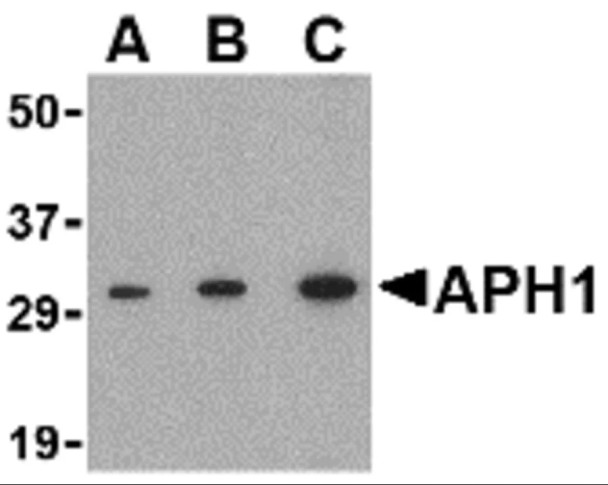 Immunogen: Rabbit polyclonal antibodies were raised against peptides corresponding to amino acid sequences from each of the corresponding proteins.

Application: These polyclonal antibodies can be used for detection of APH1, nicastrin, PEN2 and presenilin1 by immunoblot at 0.5 - 4 μg/mL, and Immunoflourescence.

Storage Condition: Stable at 4˚C for three months, store at -20˚C for up to one year.

Background: Accumulation of the amyloid-β peptide (Aβ) in the cerebral cortex is a critical event in the pathogenesis of Alzheimer’s disease. The β-amyloid protein precursor (APP) is cleaved by three enzymes (TACE, BACE/BACE2 and γ-secretase) at three distinct sites (α, β and γ respectively). The γ-secretase complex is a membrane-bound aspartyl protease that can cleave certain proteins at peptide bonds buried within the hydrophobic environment of the lipid bilayer and is composed of the proteins APH1, nicastrin, PEN2 and presenilin1. Its cleavage of APP results in either the non-toxic p3 (from the α and γ cleavage site) or the toxic Aβ (from the β and γ cleavage site). APH1 was initially identified as a component of the Notch pathway and exists in at least three distinct isoforms with APH1a as the principal isoform present in the γ-secretase complex. Mice deficient in this isoform, but not the other two, were lethal at E10.5, with impaired vascular and neural development observed. Besides acting as a critical component of the γ-secretase complex, nicastrin is also thought to be involved in cell proliferation and signaling, especially in regards to activation of Notch receptors as loss of nicastrin expression results in mouse embryonic lethality. Presenilin1 was initially identified a marker of susceptibility to early-onset Alzheimer’s disease.