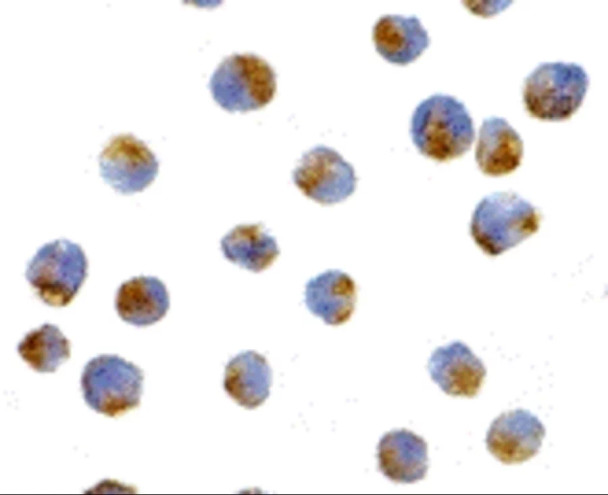 Immunogen: APG7 antibody was raised against a 17 amino acid synthetic peptide from near the amino terminus of human APG7.
The immunogen is located within the first 50 amino acids of APG7.

Storage Condition: APG7 antibody can be stored at 4˚C for three months and -20˚C, stable for up to one year. As with all antibodies care should be taken to avoid repeated freeze thaw cycles. Antibodies should not be exposed to prolonged high temperatures.

BACKGROUND: APG7 Antibody: Autophagy, the process of bulk degradation of cellular proteins through an autophagosomic-lysosomal pathway is important for normal growth control and may be defective in tumor cells. It is involved in the preservation of cellular nutrients under starvation conditions as well as the normal turnover of cytosolic components. This process is negatively regulated by TOR (Target of rapamycin) through phosphorylation of autophagy protein APG1. Another member of the autophagy family of proteins is APG7 which was identified in yeast as a ubiquitin-E1-like enzyme; this function is conserved in the mammalian homolog. In mammalian cells, APG7 is essential for autophagy conjugation systems, autophagosome formation, starvation-induced bulk degradation of proteins and organelles. It has been suggested that caspase-8 may alter APG7 levels and thus the APG7 program of autophagic cell death.